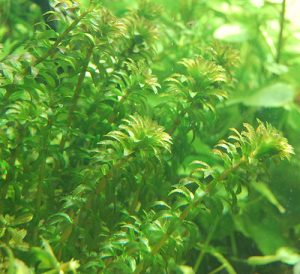 Out of the hundreds of types of aquatic plants, one of the most resistant towards salinity is , also known as Waterweed or . With Old World origins in Asia, Europe, Africa, and Australia, to America in the for aquariums, pet trade sales, and other related purposes. It quickly entered natural waterways where it became invasive and adapted to different water conditions and climates. It’s typically rooted into the bottom of most waterways, but if dislodged, it will form dense mats on the surface. in regions of Canada and most of the United States. This widespread, invasive plant has been problematic for most of the U.S. and has cost millions annually to manage and clean up.

Before discussing all of its downsides, Hydrilla has a few small benefits. For one, Chinese literature has shown that Hydrilla had for crab farming and certain fish farming. In addition, ducks, turtles, carp, and snails eat the plant. Fish, frogs, turtles, and aquatic insects can hide in Hydrilla and use it for protection when it’s available in moderate amounts, although when there is too much of it, these animals can struggle around it. Several other countries claim it has some nutritional value, though it’s not eaten directly because it’s not entirely palatable and it can lurk in deep, polluted waters, so many are wary of consuming the plant when there are more appetizing edible plants available. Hydrilla to be a rich source in iron and B- sold in power form. It’s used sometimes as animal fodder for cows and chickens. However, Hydrilla is difficult to keep under control and in small amounts, so it causes more harm than good in most cases.

Despite its very few benefits, Hydrilla is a serious problem for most. It has become such a threat that upon it to only allow one chemical, , to on it as a herbicide to prevent evolution of mutants, though it later resulted in strands of Hydrilla becoming resistant to . An aggressive and competitive plant, it displaces and shades out native species like pondweeds and creates monocultures, which affects biodiversity and the balance in ecology. This also results in a decreased available seed bank, which also can contribute to lowered biodiversity of plants and a disrupted ecological balance.

affecting other native plants, Hydrilla heavy infestations in stagnant water, creating a breeding ground for pesky mosquitoes. Hydrilla is also a substrate for a toxin called cyanobacteria, which to a disease (avian vacuolar ) that to the deaths of bald eagles in the southeastern United States. aquatic plant more often than not provides a poor habitat for fish and other wildlife, the dense mats it creates lower the level of oxygen in the waters. Its dense mats can also disrupt pH balances in the waters it overtakes. Hydrilla even supports other invasive organisms. In Florida, an invasive South American fish called the uses Hydrilla to build its nests. Any aggressive invasive species is not good in large amounts for the existing habitat.

This aggressive plant is costly for not only the environment but also for many states. It interferes with recreational activities such as swimming, boating, and fishing, interferes with navigation of watercraft in heavily infested water. Hydrilla also reduces the flow in drainage canals, clog dam trash racks, intake pipes, impacts hydropower and irrigation systems, and can even cause flooding. These issues can cost millions to fix the millions it takes to manage it.

So what is there to do about this strong and unforgiving aquatic plant? Like with most vegetation, herbicides are one of the biggest control options. Though cutting Hydrilla is possible, it’s not recommended because plant fragments can develop into new plants. It will grow quickly, so multiple applications of a herbicide will most likely be necessary. Since it is an aggressive plant, being aggressive back to it is the best option. After Hydrilla and dies off, cut and rake away the dead pieces to remove it from the waters to prevent dead material accumulation. If possible, a water drawdown and manual removal of dead vegetation can also be a good starting method. Another method is using grass eating carp, or Chinese grass carp, though always check with local fish and game agencies first.

A Hydrilla infestation can seem like a bleak situation, but if caught on early or even managed properly and routinely, . Since it’s an invasive nonnative species, most of the United States is battling to get rid of the aquatic plant, so checking with local agencies for help or identification can also help in dealing with it.