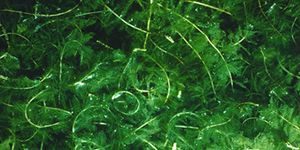 In ponds, lakes, rivers, and other bodies of water there is such a variety of vegetation and wildlife offered that provides an ecological balance. However, sometimes the balance can be overthrown with invasive species. Invasive aquatic plants can be some of the most detrimental to the environment, including plants like the Eurasian watermilfoil (Myriophyllum spicatum). The Eurasian watermilfoil is an attractive, feathery plant that was once sold as an aquarium plant in the United States, having been introduced to the U.S. as early as the late 1800s. The plant became increasingly invasive towards the late 1960s, entering numerous waterways and distributing itself throughout lakes by boats and boat trailers.

Watermilfoil is widely distributed and difficult to control. In many states, especially Washington, milfoil is considered to be one of the most problematic plants because it can drastically alter the water’s ecology. Typically, watermilfoil will form incredibly dense mats on the surface of the water which interfere with recreational activities like swimming, fishing, water skiing, and boating. The plant can also interfere with power generation and irrigation by clogging the water intakes. In addition to these issues, watermilfoil in large amounts can cause flooding and stagnant mats make a favorable habitat for mosquitoes. Another issue with watermilfoil’s dense mats is that they can deplete oxygen from the water when the wind is prevented from mixing with the oxygenated surface waters to deeper waters. These mats also increase the sedimentation rate by trapping in sediments and block out the sun.

When milfoil invades new territories, it causes the biodiversity and diversity of aquatic plants to decline. Although waterfowl can eat the watermilfoil, its downsides outweigh the benefits. Watermilfoil reproduces very quickly and is able to infest entire lakes within a couple of years and is able to reproduce rapidly through forming plant fragments. This means that when milfoil becomes brittle in early fall it breaks apart, floating to other areas where it sinks and creates new plants. Fragments can be created from boaters or other disturbances, increasing the spread of the plant. Milfoil can be very easily transported from lake to lake on boat trailers and fishing gear and since it only takes one fragment of the plant to start an infestation, it’s no wonder infestation occurs so easily and quickly. Water currents can also carry watermilfoil fragments, starting new colonies wherever the plant is carried to.

Watermilfoil, despite its invasiveness and other drawbacks, does carry a few benefits. Fish take cover in the plant, providing a safe space to grow and hide from predators. Many fishermen claim milfoil provides them with more bass because they linger in the beds of the plant. Although fish can feed on the plant, there’s evidence that there are more fish when they feed upon a native plant before they’re suppressed by watermilfoil. Another benefit is that watermilfoil’s root system holds it in place, which holds phosphorus in place, making the water clearer –a sign of better water quality. However, watermilfoil causes more harm than good. As with any nonnative and invasive species, it decreases biodiversity, affects the water conditions, gets in the way of recreational activities, and makes for a costly clean up and management effort.

Property owners, lake owners, and local governments spend millions to control this aggressive aquatic plant and even lose tourism revenue. Its long stems get tangled in boat propellers, causing damage and its dense beds inhibit swimming and fishing. Not to mention large amounts of watermilfoil can have a stench and is all around aesthetically unpleasant. It’s also expensive to repair any clogged power plant intakes and it reduces water flow to agricultural and industrial areas. Overall, it’s very expensive and unpleasant to manage for most.

Well-established watermilfoil is difficult to remove completely. The best method for prevention is thought to involve removing visible plant fragments, rinsing equipment (such as fishing gear or boats) and allowing them to dry completely before moving to another body of water. This prevents spread of fragments from lake to lake (or other sources of water). Another less-preferred method involves allowing grass carp to eat the Eurasian watermilfoil, though the grass carp will typically eat any native plants available first. However, if watermilfoil is the only aquatic plant in a lake, this method will work better. Since the plant spreads readily through fragmentation, physical efforts like cutting and underwater rototilling may not be the best way to eradicate the plant as the rate of spread can be enhanced. Hand-pulling or using machinery to mechanically harvest watermilfoil is possible and multiple harvest within the same growing season show best results. Fragments should be disposed by burning, composting, or simple trash disposal. Always remove all milfoil pieces and fragments after a removal effort so there is nothing left to re-grow.

Another method that is often successful is a water drawdown, exposing the plant for several weeks to dry. However, this method can have serious effects on any other aquatic life in the body of water. Herbicides can do the trick with multiple and patient applications. Shade barriers may also work; localized control in swimming areas or around docks can be achieved by covering areas with an opaque fabric, blocking sun light from the plant.

Most aquatic plants can be stubborn and difficult to deal with, but with perseverance, time, and effort, Eurasian watermilfoil can be dealt with successfully. Don’t be fooled by its delicate, feathery appearance; this plant is invasive and infectious, making it capable of wreaking havoc on bodies of water and its ecology.

The EcoHarvester was designed to help aide in the control of Milfoil. This was the primary weed focus when it was created. It will clear up Milfoil very efficiently. It’s a natural environmentally friendly option.

Schmickle, S. (2010, July 26). Milfoil: Bass anglers love it, water skiers curse it, Minnesotans fight over how to deal with it. Retrieved March 20, 2016 from https://www.minnpost.com/politics-policy/2010/07/milfoil-bass-anglers-love-it-water-skiers-curse-it-minnesotans-fight-over-ho